Chiappera is a rather strange place. I suspect it is no longer a real village, with 2 hotels now owning more or less all the property. The one Judith and I were using had its base and dining room in the old school house. It seemed very reasonably priced for half board and we were treated to a real Italian meal with a number of courses, so that like the walking we were never sure what was round the next corner.

Our plan for the day was to cross back into France. The only snag being that the border follows an enormous ridge. To drive to Larche would be 127km. Crossing the ridge into France was a short walk in terms of distance but a long way up and then down again.

We didn’t get a particularly early start (8.30 maybe), mainly because we didn’t want to miss out on the rather good breakfast. Although the establishment was more hotel than refuge, it wasn’t quite hotelly enough to accept credit cards. We had enough cash, but when planning this part, I had assumed a credit card would be possible.

We met with Ben and set out. The climb for the most part wasn’t as steep as it looked like it might be on the map…

…but it was long and sustained and hot. It led through very impressive scenery, heading towards an impenetrable looking barrier of mountain. 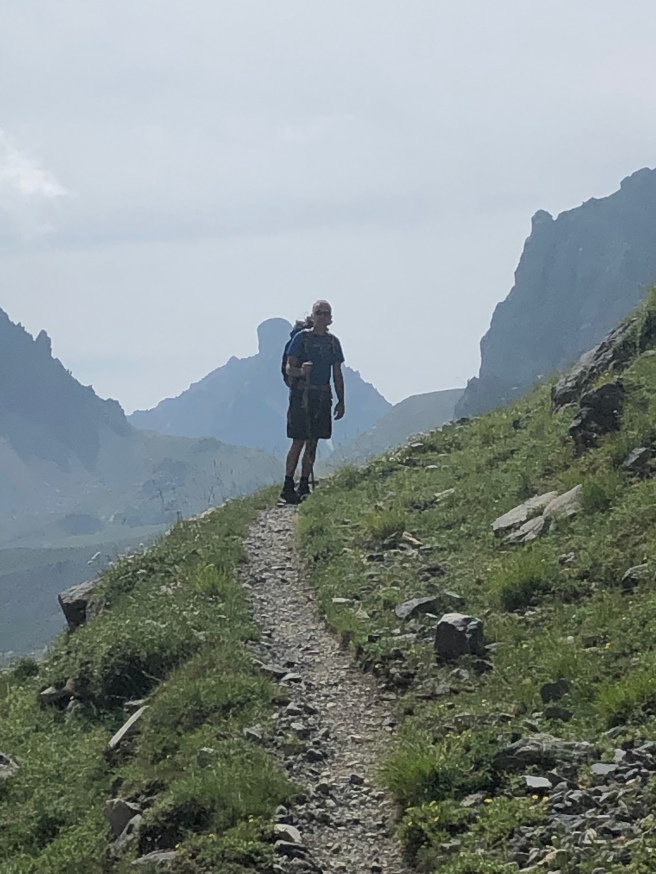 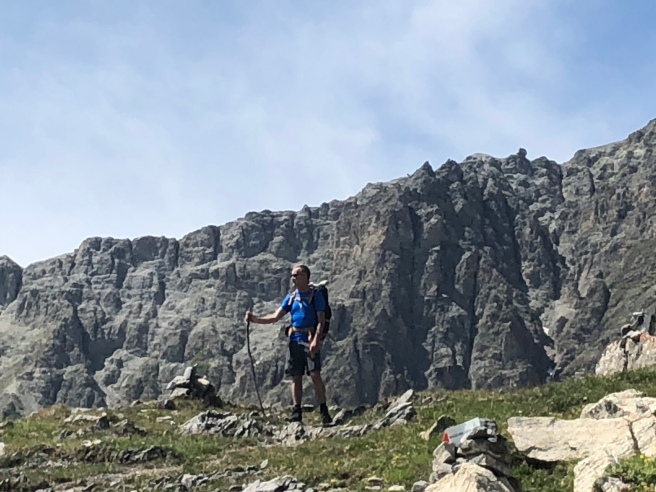 On these high mountains at the frontier, the war is not buried far below the surface and there were a number of old bunkers and dugouts and coils of barbed wire.

Eventually a corner was turned and we could see the weakness in ridge which would allow passage into France- the Col de Sautron.

The descent was as far again down the other side and as we got lower it was a bit like slowly walking into an oven.

Larche is a very small village. Ben setting is off tomorrow back to Maljasset and we are having a day off tomorrow. We are in a basic wooden cabin in a campsite, perhaps not quite was basic as Ben’s accommodation. He’s sleeping in a giant bed with 4 other people- all part of the ‘fun’.

The campsite doesn’t take credit cards either, something else we hadn’t budgeted for. Apparently there is a cash machine 18 km away, which we could go to tomorrow, but the bus doesn’t run on Tuesdays!

Luckily we found a bar which took credit cards and were able to get a glass of lemonade and cash back so I think that is now sorted.